Complex regional pain syndrome (CRPS) is a condition that causes severe pain which won’t go away. It usually affects just one arm or leg and often follows an earlier injury to the limb. However, the body’s reaction to the injury is much stronger than usual and may affect more of the limb than the original injury did. You can read more about the signs and symptoms of CRPS at www.ArthritisResearchuk.org

This issue can affect any person regardless of age. My experience of it over my career has highlighted it’s presentation in children. It is often mis-diagnosed and treated inappropriately. Early diagnosis and management is essential. The presentation of chronic pain requires effective explanation and early use of psychological support alongside Therapy. You can read a blog about the multidisciplinary approach to pain, written by psychologist Dr Alice Morgan here.

Here is a previous patient of mine writing about her experience:
“I started physio with Swati about a year after a gymnastics injury which resulted in me bruising multiple bones in my left foot and ankle. I tried to ignore it for around 8 months after the injury as I couldn’t bear not to carry on with gymnastics and trampolining. However the pain got unbearable, and minor injuries told me that I had ‘sprained my ankle’, which in the end wasn’t the full story.
Then after seeing a few consultants and having x-rays, MRIs and CT scans, the conclusion was that the bone was bruised. I was then put into a aircast boot for months, and during the time I was in it, the pain was getting worse, but no one could explain why in a way in which I could understand, so I was getting very frustrated. I then saw an NHS physio, who told me to do some certain exercises, but the pain got so much worse while doing them, and no one told me why, so I stopped doing them as I thought I was making it worse, which left me more fed up than ever because I just wanted to get back to training. Here are some pictures from the injury” 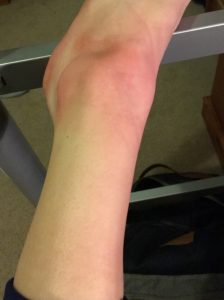 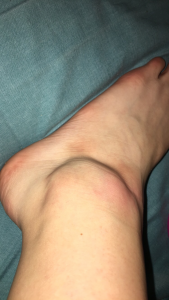 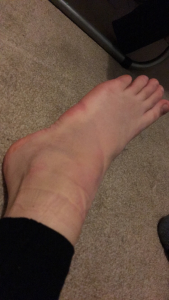 “I was then finally referred to Swati. At this point I had been in the boot for around 6 months, and after seeing Swati twice, I was out of the boot and walking again, however I was still not in a suitable condition to go back to training at gymnastics due to the huge amount of muscle wasting after being in the boot for so long. I not only had to build up the gastrocnemius from where the boot was, but I also had to work on the tibialis anterior, quadriceps, hamstrings and glutes, which took a lot of work but it was worth it. The way Swati explained everything made so much more sense than what everyone else had been saying to me, and she motivated me to get back to training, unlike everyone else.”

“I am so thankful for Swati for getting me back on track at gymnastics and trampolining, as I thought I never would, and all the exercises built back so much strength that training was made easier than before!”

Here is the feedback from LB’s dad:
“My daughter injured her foot/ankle and after 6 months of seeing consultants and having scans we were no further on. In fact as my daughter wore a plastic air-boot to protect the injury all the time it was getting worse.
We were then referred to St John & St Elizabeth hospital, made the appointment to see Swati and what an amazing difference it made! I left a message prior to our first appointment explaining the injury and that, being 14, my daughter needed a firm hand!
What I really loved is the way Swati talked directly to my daughter rather than to me. She spoke on exactly the right level, carefully explaining what was going on with the injury and why, but never in a condescending way. Swati is very direct and laid it on the line with what my daughter needed to do with exercises, which is exactly what was needed. We came away from the first session, both of us smiling and I thought “finally we are going to get somewhere”.
To be fair to my daughter she took everything on board and worked quite hard so that we ended up only requiring 5 sessions of physio and now my daughter is back doing the gymnastics and trampolining that she loves to do. If only we had been referred to Swati months earlier a lot of time, pain and grumpiness could have been avoided…”

Click here for a video of LB on her return to gymnastics LB video gymnastics, what an amazing achievement. I am extremely proud of my patient, who took on board and understood the complicated presentation of CRPS. She was hugely motivated and that positivity to return to her sport, made it a lot easier to manage and treat her symptoms.

If you have concerns about your child, please consider getting in touch to arrange a physio assessment. You can find contact details here